The gyroscope sensor measures the rate or rotation in rad/s around a device’s x, y and z axis. Rotation is positive in the counter-clockwise direction; that is, an observer looking from some positive location on the x, y or z axis at a device positioned on the origin would report positive rotation if the device appeared to be rotating counter clockwise. This is the standard mathematical definition of positive rotation and is not the same as the definition for roll that is used by the orientation sensor.

Standard gyroscopes provide raw rotational data without any filtering or correction for noise and drift (bias). In practice, gyroscope noise and drift will introduce errors that need to be compensated for. You usually determine the drift (bias) and noise by monitoring other sensors, such as the gravity sensor or accelerometer. 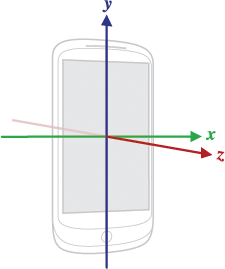 The coordinate-system is defined relative to the screen of the phone in its default orientation (facing the user). The axis are not swapped when the device’s screen orientation changes. The X axis is horizontal and points to the right, the Y axis is vertical and points up and the Z axis points towards the outside of the front face of the screen. In this system, coordinates behind the screen have negative Z axis. Also, the natural orientation of a device is not always portrait, as the natural orientation for many tablet devices is landscape. For more information, check the official Android’s Sensor Coordinate System documentation.

Contains the hardware sensor capabilities in the mobile device.

A gyroscope measures the rate at which a device rotates around each of the three spatial axes, as shown in Figure. 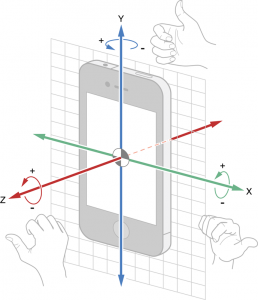